How I Became A Computer Programmer 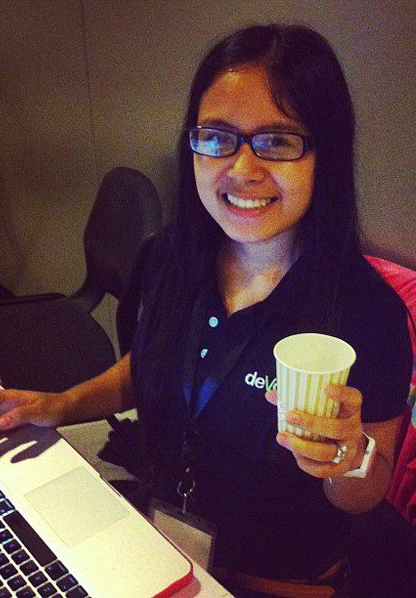 Before anything else.. I’d like to show to you a video that reminded me why I chose to be a computer programmer and made me even more proud of what I have become.

During and before sophomore year high school, when asked what I wanted to be when I grow up, I would have answered to be a lawyer or a journalist.

My First Hello World
When I stepped into junior year (2005), I was 14, I had my first programming lesson. The programming language taught was Turbo Pascal. Then I coded my first “Hello World”. My first Hello World wasn’t that easy. Sir Ryan, our computer teacher, wrote the code on the white board and that time, I already have poor eyesight so I had to walk near the board and remember it then type it on the editor. haha. I didn’t have a good memory nor good attention to details either so I had real headache! I was jealous of my other classmates, they got it right immediately. But after many attempts, yes, I finally got it working! Good job!

Fullfillment of Solving More Problems
Eventually, Sir Ryan gave more math problems, series, and input-output programs. It was challenging but really fun! Every time I get to solve a problem, I felt like being awarded with a medal on stage with confetti all over! The feeling was so addicting that I wanted to solve more and more problems!

My First Computer Program Project
Senior year (2006), we were taught JavaScript programming. My teammates were Jomar Sardua and Enrique Famas. We were so creative that we named our team HaiFamaSardua. (so creative!) Both were my Ragnarok and PS2 buddies. Our first project? A dynamic periodic table! After you click a box with symbols, the information of that element will show up in the top center of the screen.

Side Story: Touch Typing in Grade 3
I don’t remember exactly what was the OS of our computers we had in school but I remember they were all texts. We had a computer class and we were taught how to touch type. Then I was introduced to a sentence which eventually became my favourite sentence: “The quick brown fox jumps over the lazy dog.” Final exam was we were blindfolded and tasked to type as many correct quick brown fox sentences. My father made me practice this a lot with our extra keyboard at home. I think I did well. Thanks Popsi dear! It helped me finish a lot of projects, IT related or not.

Choosing My Path for College
My top 3 choices were related to Journalism (I like writing), Tourism (I love traveling more than anything else!) and Computer Science (problem solving is fun!). Both my big brothers were Computer Science degree holders and somehow they’ve convinced me that there are so much opportunities in the IT field. Weighing my options, I took Computer Science. And they’re right!

Hello College!
College offered bigger and more complicated problems to solve. But guess what? I finished freshmen with all major subjects getting A grades! But that didn’t last long. Many were too much for me to handle but I survived four years in computer science with enough GPA to maintain my scholarship. yey! *taps self on the back*

Hello Work!
I was pretty active with the Computer Science student organization. I met Sir Jonathan Yap. Then eventually got recommended and invited to join the NMG team. Fast forward, I became an iOS developer!

Hyped Up For My First Belle de Jour Rendezvous!