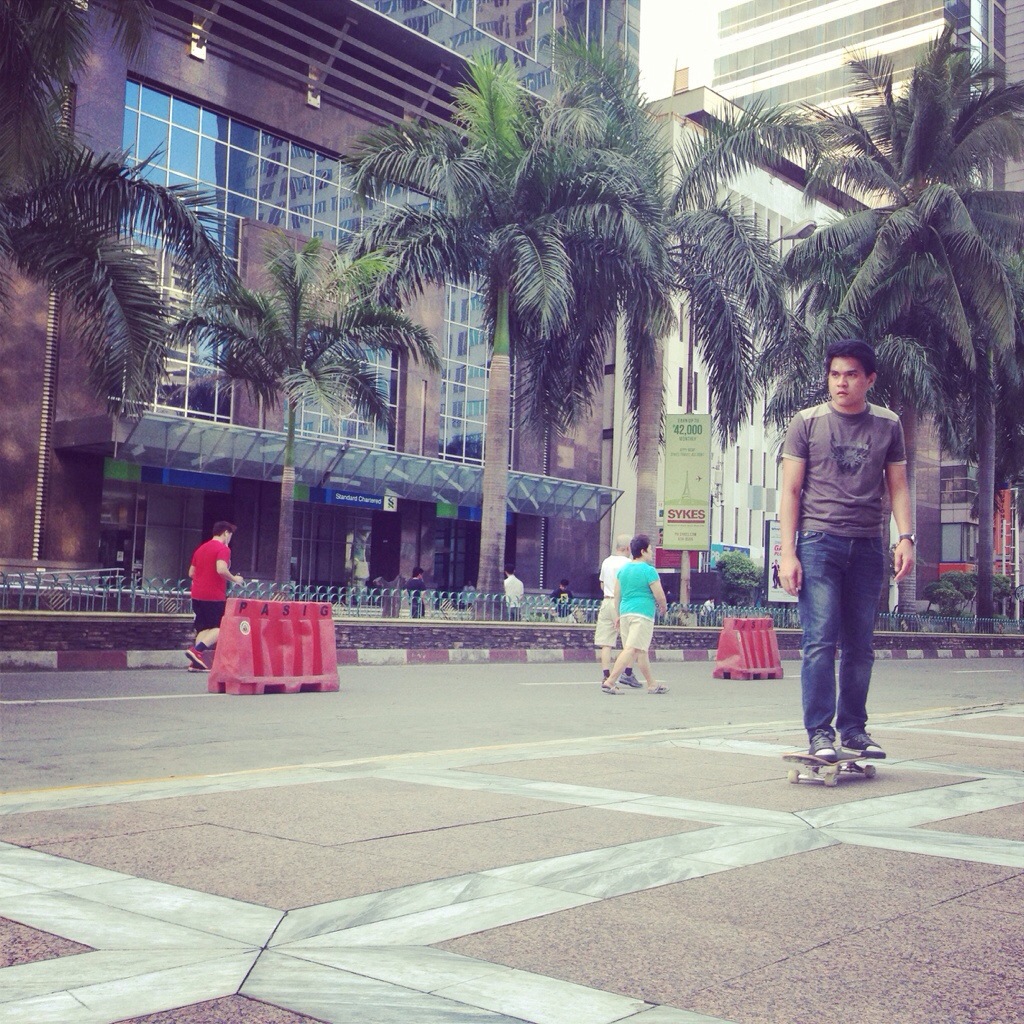 On Sundays, Emerald Ave or F. Ortigas Jr. in Ortigas Center is closed from 6am to 6pm, thus, no car can pass by. Found out about it few months back when we had an event on a Sunday at Exist TechBar which happens to be in Emerald Ave.

With Franz who just bought a skateboard, we made use of this open area for him to practice. It was a cloudy day and the street looks like a park.

Just like Franz who went there to practice, there were many like him who were practicing only that they were practicing tricks already like jumping or flipping their boards. There were also mommies talking a walk with their babies or dogs walking with their owners. You can also rent bicycles or tricycles and ride it along the street. Some kids were being taught how to ride a bike by their parents. Many were jogging. And many others were just like me, sitting on the sides observing and mind wandering.

Sometimes I would borrow Franz’s board and start riding it. Julian, a friend who really do skateboarding said the term is called “push”. But i find it weird so im using ride. I know a little about it since we had a board at home in the province back in grade school. What i enjoy the most is when the ride is really fast i could feel the wind against me plus the thrill of trying not to fall to avoid injury.

While Emerald Ave is a recreational park on Sunday, during weekdays, this street is pretty busy with cabs and cars. Office employees, those with client or board meetings or salespeople walk by when the sun is up. At night, this street is still busy with nightshift folks mostly from callcenters. Starbucks, Coffee Bean and Tea Leaf, Mcdo, Jollibee, Mang Inasal, KFC, 7eleven and ministops can be found easily. The building in the background in the picture is where i work, Orient Square.

It was a nice Sunday. We’ll definitely come back here next week. Whoever thought about turning this street to serve like a park on Sundays is brilliant.

Lessons During Our Audit Day

Myers-Briggs Personality Type: I am an ENTP!

5 Lessons From My First Casino Experience

tell my buddy to do an Inward Heelflip. that would be cool and ooh take a photo of when he fell in the floor. :)